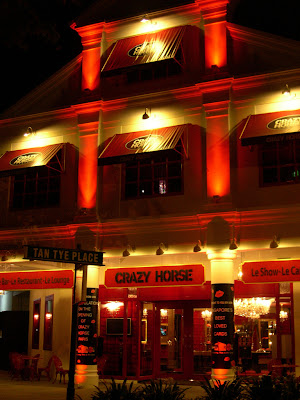 Two things caught my eye today as I scanned the newspapers.

The more highly publicised one was of course the untimely demise of Crazy Horse Paris, a topless cabaret show that kicked off 14 months ago with much ra-ra and buzz. Touted to bring Singapore's entertainment to an exciting feverish pitch, it somehow failed to live up to expectations.

What led to its early departure from Singapore's nightlife scene?

I believe that awareness is not the reason. Ask anybody in Singapore if they have heard of Crazy Horse Paris and the answer would probably be a resounding "YES" (or maybe a sheepish one for some). The huge initial wave of publicity which the venue enjoyed plus its uniqueness made it a household name. While more prominent advertising may possibly help to elevate its awareness and top-of-mind-recall, I seriously don't think that's a factor.

So what really went wrong for the world's largest Crazy Horse venue?

1) Cultural Fit. People in Asia, least of all Singapore are still conservative and shy at heart. Censorship applies in Singapore because the majority still hold on to traditional values. There is also little resonance between dancing European women and the average Singaporean or tourist.

2) Price. While our economy may be booming, most Singaporeans are rather price conscious. The low air ticket prices to regional destinations like Bangkok (where the horses are probably crazier!) makes the value proposition offered by Crazy Horse less attractive. I also don't see why high net worth gentlemen and ladies would want to be seen in such a public place.

3) Partnerships. In any lifestyle business, especially one that is very tourist centric, you need to forge strong alliances with value chain partners. This will mean travel agents, hotels, airlines, clubs, associations, and societies. You must offer special deals, commissions and kickbacks that make it worthwhile for others to promote you. I remembered that Neptune Theatre (another topless revue which went defunct a couple of months ago) kept itself alive for a considerably longer time through doing a lot of D&Ds with associations and unions.

4) Renewal. You need to constantly innovate and refresh your act to keep the audiences interested. It is unlikely that people will watch a movie in the cinema multiple times unless it is a blockbuster or a golden favourite with strong sentimental value. This is why attractions like the zoo and science centre constantly introduce new exhibits, programmes and highlights. While Crazy Horse did change its performances later, it was already too late to change people's mindset that it is the same old show

On the western end of the island, we read about a family of crocodiles languishing in a habitat which isn't fit for even cold-blooded reptilians. Matched against its illustrious avian neighbours (Jurong Bird Park), it obviously had to play a very hard catch-up game.

What's surprising though is that the Jurong Crocodile Paradise actually has over 2,500 crocodiles, arapaimas (the world's largest freshwater fish), pythons, terrapins, underwater viewing areas, a breeding enclosure, and daily Steve Irwin inspired crocodile-wrestling shows! At a low cost of only $2, it obviously was good value for money. I would have brought my family to visit it, if only I knew about it.

In this case, the biggest problem was truly the lack of awareness. If Crazy Horse feels that its publicity reach was inadequate, then the crocodile farm's must be truly abysmal.

Jurong Crocodile Paradise could have also tied-up more aggressively with Jurong Bird Park or other western attractions (Singapore Discovery Centre, Singapore Science Centre etc) to provide value to customers. These packages may give more reasons for people to bring their families there for a day of fun.

In addition, it should have participated as a member of the Association of Singapore Attractions and leveraged on our network of brochure racks around the island at tourist destinations and entry points. These brochures have high visibility and can generate attention if they are attractively done.